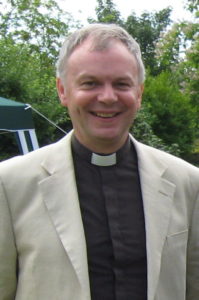 Our Vicar is Fr David Lyon. He trained originally as a teacher, subsequently trained for the priesthood at Mirfield and was deaconed in the Chester Diocese in 1987. He held curacies in Crewe and Altrincham before going to St Peter’s, Accrington in 1991. He became Team Rector of the group of six churches in 1997, and remained at the Accrington Team Ministry of Christ the King until 2010, when he became our Priest-in-Charge.

Fr David brings a deep sense of spirituality, centred on his calling to the priesthood and sustained by the daily Offices and the daily Eucharist. He places great emphasis on pastoral care and enjoys assisting people on their individual pilgrimages through life. He has also led regular pilgrimages to Walsingham as well as one to the Holy Land.

Fr David’s wife Brenda comes from Aberdare in South Wales and is a retired primary school teacher. She and Fr David have one daughter called Elinor.

On the 9th February 2010 the Bishop of Lancaster‚ The Rt Revd Geoff Pearson, licensed Fr David Lyon as Priest-in-Charge.

On the 27th March 2017 the Bishop of Blackburn‚ The Rt Revd Julian Henderson, licensed Fr David Lyon as Area Dean of Kirkham.